This is an outstanding image of United Egypt. Let us work hard to keep Egypt like this for ever!
Posted by Egyptian-in-USA (Egyptian Muslim Human) at 9:15 AM No comments:

I am not worried about Egypt anymore

The historical turn out in the voting polls yesterday makes me feel very positively about Egypt future.

Democracy is here to stay in Egypt protected by the Egyptians both alive and those 800 who died in the Egyptian revolution.

To all Egyptians notice that democracy can not promise you the best government but it promises you that you can change any government that fails you.

Egypt, welcome to the free world!

It is time to work in all fields. It is time to care of our sick, our homeless and our poor. It is time to contribute to the progress of humankind!
Posted by Egyptian-in-USA (Egyptian Muslim Human) at 8:38 AM No comments:

I am sorry dad!

I have to apologize to the Egyptian people. I have accused you before that you are not willing to contribute to the political life. I was wrong, you were willing but you were smarter than me. You knew your voices would not count in the days of Mubarak and that is why you stayed home but now you know they will be counted and that is why you stood in lines for hours to vote today. 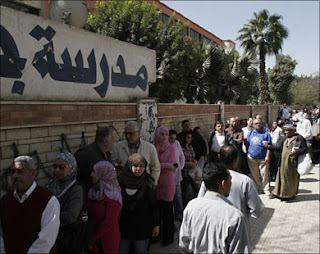 Posted by Egyptian-in-USA (Egyptian Muslim Human) at 2:14 PM No comments: 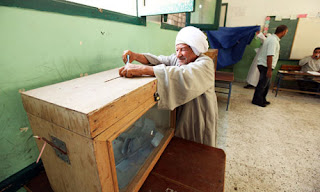 If I am in Egypt I would vote no. Simply we have a chance to write a new constitution right now under the protection of our army. This new constitution will change the political playfield in Egypt. It will empower every day Egyptians and would not let the old parties that had failed us over and over in the last 30 years. Yes, Mubarak and the NDP are to blame (and should have their day in court with a lawyer defending them) but most of the political parties in Egypt are not innocent or failed to fulfil its job to say the least. They were part of the problem.

Therefore, we need to turn the page. We need to write a constitution for the 2011 and not to have the same parties that shared (kind of shared) Mubarak his corruption by how week and divissive they were to our society.

I need a new Egypt, a new society and I trust our Egyptian armies to protect us while we are doing this. I do not trust the political parties currently present to do this. ... hence Vote NO so we can draft a completely new constitution.

One of the funniest shows in the States is the Daily show. Here is a similar program in Egypt:

I think the sucess of the Egyptian revolution will affect our media in Egypt and creativity will explode with new products to market all over the world.
Posted by Egyptian-in-USA (Egyptian Muslim Human) at 1:07 PM No comments:

One day all arabs kings and presidents will be removed

.
One day after all the arabs kings and presidents will be removed from power by their people, Arabs will have a chance to make a modern society that would contribute to the progress of humans on this earth.

That day seems to be soon. I leave you with:
هشام الجخ - التأشيرة

Posted by Egyptian-in-USA (Egyptian Muslim Human) at 11:37 AM No comments:

and we the people won our country back

Mubarak's Prime minister was fired or resigned under pressure. We have a new Prime Minister someone who we can trust to build a democracy in Egypt. Not an easy job with all the distruction that were left from Mubarak's regime.

The new Prime minister started his reign with a sincere and a smart move. Going to the rebels in Tahrir Square to get their blessings. The right move to do. We the people need the government to protect the revolution and the government wants to us to stay in power.

I feel very happy to see us finishing this stage of our revolution. I have to say that building a new regime is much harder than destroying an old rotten regime. Building is always more difficult than destroying. It takes time and plans and sincere efforts. Destroying take outrage and can be done quickly.

So people of Egypt, let us build a new country worth of the sacrifice of the 550 Egyptians we were killed in Tahrir square so you and I can enjoy our freedome. Let us cherish this freedome and do not let any one take it from you under any banner, what so ever, now matter what execuses they use (terrorism, religion, national interest, ...etc).

Freedome is the best asset we can have and it is the seceret ingredient to progress and to security.

The freedome of rich to run their business is the only security for the poor to gain wealth.


Let us build a country that would be an example for other countries in 2011 and beyond by first being free and the rest will follow.


Thanks to Aljazeera for the photo: 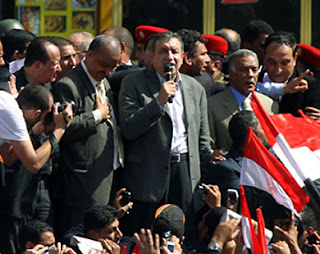 Posted by Egyptian-in-USA (Egyptian Muslim Human) at 8:44 AM No comments: