Science magazine, THE SCIENCE magazine had this article today:

by Bruce Alberts (Editor-in-Chief of Science).

"I have just returned from Egypt, .... This is a very exciting time to be in Egypt, with its people empowered by the success of their daring, peaceful demonstrations in Tahrir Square. .... I was repeatedly asked, “What should the role of science be in the new Egypt?

...Scientists in general take it for granted that, to be successful, the scientific enterprise must operate as a meritocracy. Ideas, results, and opinions must be evaluated independently of their sources, because it is what is said that is important, not who says it...... it is the establishment of a strong merit-based culture in both the public and the private sectors that will make the new Egypt successful.

There are lessons to be learned from the mistakes made by other nations. For example, years ago I was shocked by the remarks made by a scientific leader in India who, when asked about the major problem in his large research institute, told me that it was “getting people to work.” ....This has also been the case in Egypt, and it has contributed to the widely recognized nonperformance of the Egyptian government.

... an institution thrives when its individuals are not only held accountable for their work, but also when each person is judged by his or her merits, without respect to the individual's social status or personal connections.

.... For the new Egypt, as for the United States, finding a way to ensure that all institutions are merit-based will be a difficult, but absolutely critical, task.
Posted by Egyptian-in-USA (Egyptian Muslim Human) at 9:30 AM No comments:

To Mubarak: this was not about money

So Mubarak just told us over Arabia TV that he does not have money!?

We will get our money back, do not worry! ... but listen Mubarak, this was not about money. This was about a country that you destroyed.

Here is a reminder of what we had to go thru to get rid of him:

I do not want to hear from this guy again except in the court of law defending his crimes in front of judge.
Posted by Egyptian-in-USA (Egyptian Muslim Human) at 3:12 PM No comments:

What is needed, the army, and religion in Egypt

Here is the rest of the demands that the people want:

I have to stress however that I truly trust the Egyptian army. From the start till now the army has been with the revolution and when I say the army I do not mean every single soldier and officer. There is always bad apples in every basket. So do not talk about few accidents here and there. Look at the overall image: the army is with the revolution!!

When the Army is not with the revolution things go the other way. Remember China square!! 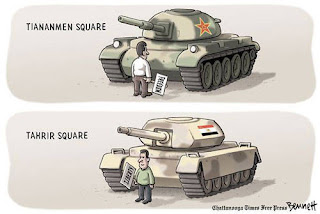 The reason the army is with the revolution is that the army is us! Look at the face of those soldiers. Those are us! 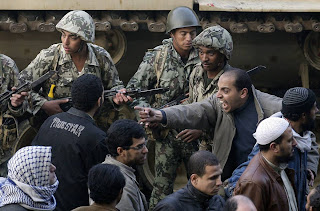 Of course who ever took this image wanted to hint and spread the fear of a zealous religion-flavour dark future for Egypt. This what I kept hearing in the media here in USA. The images on the newspaper always showed people praying in Tahrir. My two cents for the western media is: you do not understand the Egyptians. They are religious in a kind way, not the way that make you burn books a la Florida priest but religious in a way that makes them trust that the future will be OK and that justice will be done at the end. Those are all positive things that makes Egyptians cope with the stress of life. Taken in the wrong hands, however, those are also attributes that make you patient for over 30 years under the rule of a corrupt dictator.

My point is the west does not have any thing to fear from the religious nature of Egypt. Nor do Egyptians have any thing to apologize for. Our true religion makes us resilient, peaceful and just people. It is the wrong understanding (usually grows under dictators) of religion that makes you hostile to others, introverted, and stupid. 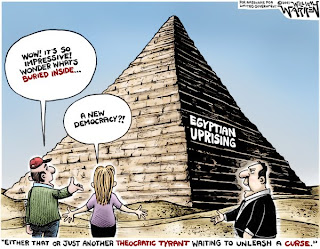 With freedom flourishing in Egypt now, I am sure all the wrong misguided interpretation of religion will disappear (slowly but surely) and a clear clean and energetic modern society will show up and help in solving the world problems (diseases, pollution, injustice, ... etc). So Cheer up West, Egypt is cleaning up and will be here soon. Watch the story unfolds ....

Posted by Egyptian-in-USA (Egyptian Muslim Human) at 9:26 AM No comments: